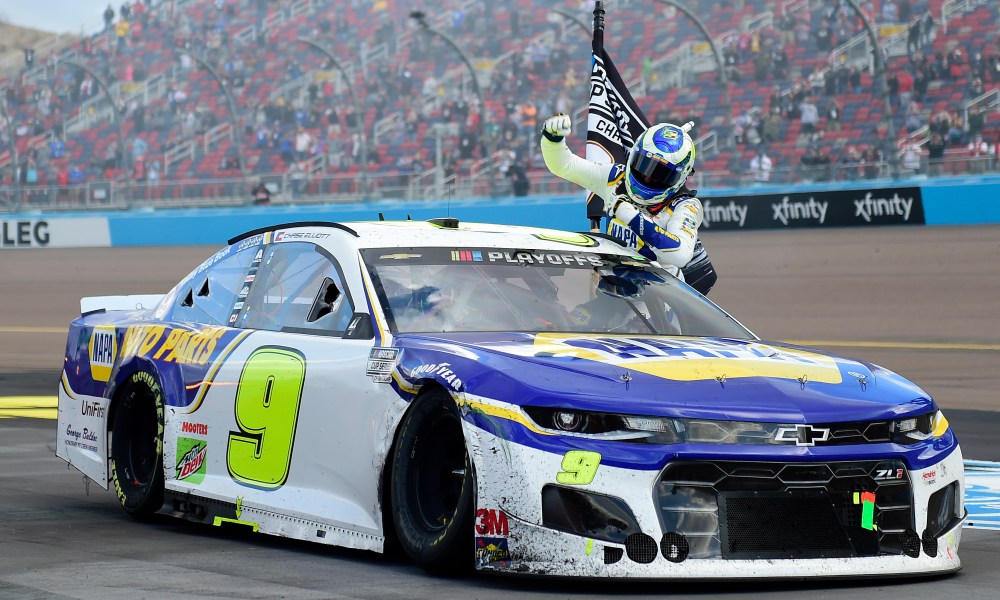 The spotlight is on Chase Elliott this weekend as the NASCAR Cup Series tackles the Daytona International Speedway’s road course, with the reigning champion riding a four-race win streak.

Elliot clearly relishes the road tracks, the Hendrick Motorsports Chevrolet driver also finished second last week in the exhibition Busch Clash event on the oval-road layout, after both taking and losing the lead on the last lap. Makes sense why Elliott is Sunday’s favourite, according to BetMGM, by 2-1 odds.

Furthermore the No. 9 Hendrick Motorsports Chevrolet will start from the pole position with Daytona 500 champion Michael McDowell in the No. 34 Front Row Motorsports Ford sharing the front row in the 40-car field.

Martin Truex Jr., the 2017 title holder, boasts a second-best 4-1 odds. He’s tied for second-most road wins among active drivers with four; Elliott has just one more. Truex has consistently been in the contention to win at road courses over the past decade, too.

En route to his championship, Truex split the road-course slate. He led a race-high 25 laps at Sonoma Raceway, only to lose his engine and finish 37th. He later won at Watkins Glen International, leading a race-high 24 laps.

Truex rebounded at Sonoma in 2018 to win by more than 10 seconds and lead a whopping 62 of the 110 circuits. At Watkins Glen, he was on his way to cross the finish line first but ran out of the gas and sputtered across in second. The Charlotte Motor Speedway Roval was also introduced this season as a third road-course show, and while battling for the lead in the final corner, Truex was spun by Jimmie Johnson and ultimately placed 14th.

In 2019, the No. 19 Joe Gibbs Racing Toyota repeated at Sonoma after leading a race-high 59 of 90 laps. Truex once again was runner-up at Watkins Glen. And at the Roval, he navigated his way up to seventh after an engine change and two in-race penalties.

And then there’s last season. Sonoma and Watkins Glen were taken off the schedule due to the COVID-19 pandemic. The Roval remained, and the Daytona Road Course was added. Truex finished seventh and third, respectively, after overcoming speeding penalties in both events.

That’s three wins out of 10 opportunities. Truex could have won each race, but saying could have is different than promoting should have. The reasons he didn’t are valid – and a part of racing.

Elliott won five of the seven Truex did not. Kevin Harvick (2017 Sonoma) and Ryan Blaney (2018 Roval) round out the 10 total otherwise.

The wins may be skewed toward Elliott, but Truex and Elliott match in top fives (six) and 10s (eight). So, as the hype points toward Elliott, eyes can drift toward Truex with the expectation they may be side-by-side at the finish.

As NASCAR adapted to COVID-19 protocols last season, practice and qualifying were eliminated at a majority of national-series events to limit at-track time, exposure and to cut race weekend costs.

That metrics format remains in place this season, drawing on performance from both individual races and season-long results.

See the full lineup for Sunday’s Cup Series race below.

Practice and qualifying are tentatively scheduled for eight Cup Series races this year. Busch Pole Qualifying was held for the season-opening Daytona 500; the next race with time trials scheduled is the March 28 event at Bristol Motor Speedway’s dirt track.